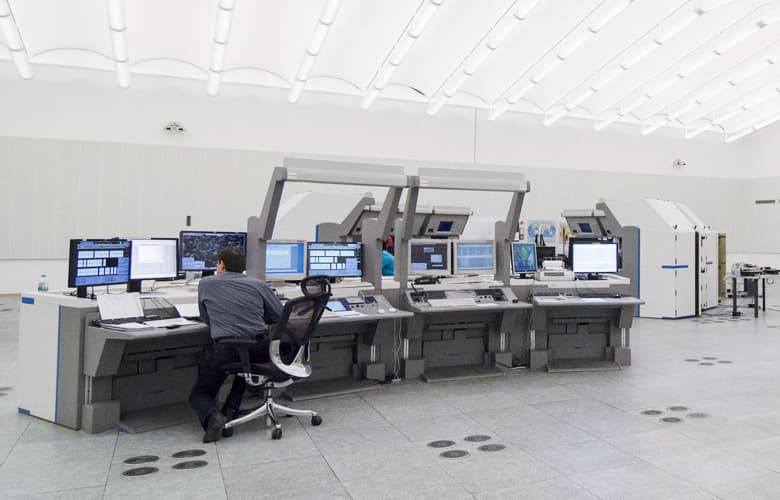 Air navigation services from Sofia ATC Centre are provided by the automated ATM System SATCAS which commenced operation on 14 February 2008. The actual v. 3 DL of SATCAS presents multi-radar information and possesses a number of functionalities enabling internal inter-sector coordination and data exchange with other systems, thus rendering it one of the most advanced ATM systems in Europe.

Sofia ACC provides continuous ATS over a territory of approximately 145,000 sq. km. About 771 617 en-route civil flights were controlled in 2018 without any delays attributable to operational constraints. During the busy summer period for a day ATCC Sofia serves about 3000 aircraft, the peak day being 18.08.2018 (Saturday) with 3422 aircraft.

Every 24 hours during the high summer season Sofia ACC provides services to approximately 3,000 overflying aircraft. Sofia ACC has the required capacity for the simultaneous operation of 11 civil sectors and 2 sectors for civil/military coordination. Each of the sectors is equipped with identical working positions for two air traffic controllers (ATCOs) – executive and planner ATCO working positions.

Sofia Approach (APP) and Sofia Tower (TWR) provide air traffic control services to flights at Sofia Airport. The air traffic flow at Sofia Airport consists mainly of regular international lines. In 2018, at Sofia airport, more than 61 000 aircraft movements were controlled. Plans for the extension of Sofia Airport and the opening of new international lines require the implementation of an Advanced Surface Movement Guidance and Control System (A-SMGCS), which will ensure safe services to aircraft and vehicles on the aerodrome maneuvering area.

Sofia Flight Information Centre (FIC) provides flight information service to aircraft performing flights in Class G uncontrolled airspace. The service is provided by ATCO coordinators who receive and disseminate aeronautical, meteorological and other information which may affect the safety of flights.

Sofia FIC provides flight information service in the airspace of Sofia FIR outside the controlled zones/areas and ATS routes between the ground level/water surface and FL 105.