How is Air Traffic Management evolving in Europe? Are Industrial Partnerships really the way forward? Is FAB regulation still relevant? What does the future hold? We interview the Co-Chairs of the DANUBE FAB Strategy and Planning Standing Committee to take stock, and assess the direction of FABs.
DANUBE FAB is an increasingly flexible partnership. Its benefits confined neither to its borders nor to SES implementation. Read about our response to the political crises in the Middle-East as the Eastern gateway to Europe, and our role in contributing to a seamless European airspace through inter-FAB cooperation.
We hope you enjoy reading this newsletter, and wish you a pleasant summer season!

South Eastern Europe Night Free Route Airspace (SEEN FRA)
A stepwise approach based on regional initiatives is vital in building experience to overcome the complexities involved in moving towards a seamless European airspace.
The recently initiated cross border Night FRA project between the States of Hungary, Romania and Bulgaria represents such a step. Bridging the airspace between the two Functional Airspace Blocks of FAB CE and DANUBE FAB by spring 2017 will allow Airspace Users complete freedom to plan routes throughout the combined airspace of the three nations at night, paving the way for future expansion. 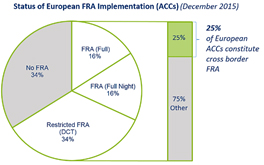 All EU Member States have until the end of 2021 to implement FRA within their own airspace. To date, whilst 66% of European Area Control Centres (ACCs) have implemented FRA to some extent, only 16% have full 24h FRA, and only 25% represent cross border initiatives, both of which are required to allow Airspace Users complete freedom in planning their routes in order to maximise benefits (Figure above).

Current statistics represent a good start, yet achieving FRA across large sections of Europe as promised by a number of wide reaching partnerships brings significant challenges which should not be underestimated (Table above). It is wise to overcome these barriers through a number of well-defined and achievable milestones initially based on regional cooperation, as opposed to a “big bang” implementation. 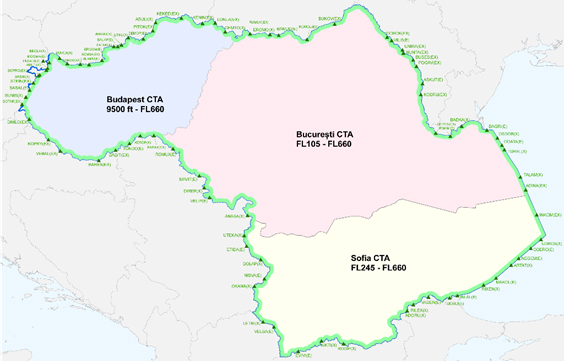 The DANUBE FAB and HungaroControl (member of FAB CE) partnership to extend their FRA projects represents a concrete step in this direction (Figure above). With dedicated project teams assigned, the Concept of Operations and the implementation plan have been drafted and agreed, and Air Traffic Management System testing is currently underway between the three ANSPs, in preparation for implementation by spring 2017.
This project will generate cost savings for Airspace Users in terms of distance flown, time taken and fuel consumed, as well as reducing environmental impact.
On top of these direct benefits, the lessons learned from this trilateral inter-FAB initiative and the shared experience from each ANSP’s FRA projects will give great opportunities to expand both the geographical scope and hours of operation, as ANSPs collectively improve flight efficiency for Airspace Users.
DANUBE FAB: The Eastern Gateway to Europe
The benefits of a FAB are not confined to SES implementation – The structures and relationships built from these permanent partnerships are able to deal with a range of issues. DANUBE FAB forms an important link between the East and West, which enabled compromises to be made in managing critical airspace developments triggered by the political crises in the Middle-East.
A 5000km arc of total or partial restrictions across the Near and Middle East heavily inhibit global air traffic. For Eastern Europe, the avoidance of Ukrainian airspace since the start of the political crisis, coupled with the closure of Syrian and Iraqi airspace in April 2014 has had a particularly heavy impact in the area (Figure below). 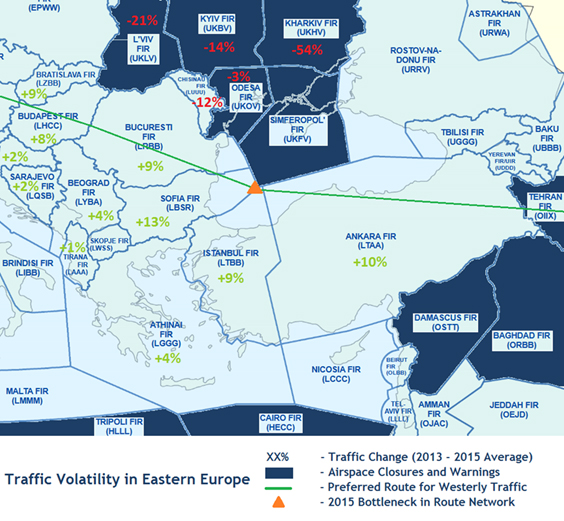 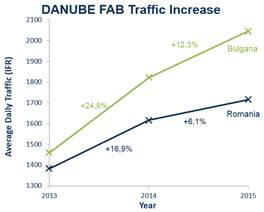 Major East – West traffic routes now overfly Turkey directly into DANUBE FAB as the Eastern gateway to Europe, leading to an average rise in overflights of 15% within DANUBE FAB (Figure above), with some sectors reporting an increase of 80% compared to a European average of 1.5%. A bottleneck at the main crossing point for westbound traffic into Europe at the interface between Turkey and DANUBE FAB therefore generated 115,000 minutes of delay in 2015. This accounted 1.5% of the total delay in European airspace, in a region which typically reports none.
The Turkish proposal to split the affected traffic into two separate routes was designed to reduce, or eliminate the capacity delays in the area. However, air traffic routes do not end at national boundaries, so reorganizing such a busy route shifted potential problems in the core of DANUBE FAB, rather than resolving the issue entirely. A coordinated approach was required between the Romanian, Bulgarian and Turkish Air Traffic Services, the Network Manager and ICAO in order to distribute benefits and constraints safely and fairly between the three States involved whilst ensuring capacity for Airspace Users.

The proposed reorganisation is expected to re-distribute complexity within DANUBE FAB’s sectors (Table above). The effective FAB structures facilitated dynamic coordination between ROMATSA and BULATSA, allowing both sides to reach a compromise in the form of a temporary agreement which ensures adequate capacity in the Black Sea area. The reorganisation will be monitored and evaluated using FAB mechanisms in light of 2016 operations, followed by proposed improvements for 2017.
The routes, published on 28th April 2016, to date have generated 0 minutes of ATFM delay. The full effectiveness of the airspace reorganisation will be evaluated by comparing the 2016 summer season traffic values to summer 2015.
With growing traffic from emerging economies and continuing political crises across the Middle East, 2015-16 has demonstrated that the bridge between East and West is as important as ever. DANUBE FAB has a crucial role to play as the Eastern gateway to Europe.
Taking Stock: The Directions of FABs
An Interview with the Co-Chairs of the DANUBE FAB Strategy and Planning Standing Committee 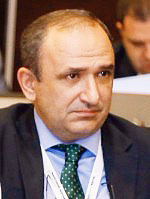 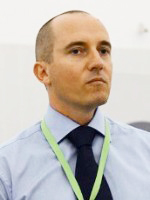 Veselin STOYANOV
SAPSC Co-chair for BULATSA
Director European Programmes Projects and Strategy at BULATSA
ANSPs look in much the same way as they always have. Why is that? Is the ATM environment changing, and how should ANSPs respond?
Adrian Florea: Air Traffic Management has always been a conservative trade, and it has good reason to be. We are dealing with aircraft flying at hundreds of miles per hour and the last thing you should try is to experiment every now and then. The reasons to be careful about change lie deep within safety culture. The established model ensures the sovereignty of national airspace and protects a complex, skilled and safety critical industry.
However, things are changing and many European States are taking a leap in progressing towards higher performance models. We’ve heard about privatisation, new technologies or competition to drive efficiency, as well as new partnership arrangements between ANSPs and suppliers. Consolidation of services is another trend and here in the DANUBE FAB we have reduced the number of ACCs to drive cost savings and increase productivity.
With the wide consensus that ATM needs modernising, an increasing number of ANSPs are working towards a new future in providing services in a global marketplace. Benefits of these investments may bear fruit in the near future, ANSPs who do not respond quickly to this trend may find themselves too far behind.

Many people are championing industrial partnerships as a more effective tool to deliver SES. Have FABs had their day?

Veselin Stoyanov: Partnerships look like an increasingly attractive option to manage risk, lower costs, share experience and increase influence. Concluding that industrial partnerships are better ways to deliver change than a FAB, however, is too simplistic. New industrial partnerships are expected to show benefits because they are flexible arrangements designed for a specific goal based on a positive business case, the drivers are there.
FABs on the other hand are mature and powerful vehicles capable of fundamental change, but arguably have not yet “had their day” as the drivers for such change simply have not been strong enough. FABs are long standing and robust partnerships between neighbours with mature working relationships, often in similar stages of development, permanently bound by State-level agreements between national governments. As the ATM environment continues to evolve in favour of reform, the political will to make better use of FABs may be just around the corner.

A lot has happened since the original 2004 regulation to set up FABs, is it still relevant?
Adrian Florea: There are many achievements that can be pointed to as a direct consequence of FAB regulation: DANUBE FAB’s Cross Border Sectors, Denmark-Sweden FAB’s joint training facility, Entry Point North and its joint ACC NUAC, and UK/Ireland FAB’s Dynamic sectorisation to name a few.
Whilst these are progressive initiatives in their own right, the original vision for FABs was for significant defragmentation of airspace. In this regard, many FABs have been criticised about airspace efficiency, indeed there are areas in the network which would benefit from more direct routes which still requires a coordinated European approach.
Other avenues to deliver SES are being championed such as the bottom up, industry led initiatives as demonstrated by the success of industrial partnerships at the recent Single European Sky awards. This flexible approach is also proposed in draft SES 2+ legislation.
Whilst focus is shifting, FAB regulation still exists and so is still relevant. Rather than being dispirited by what seems like the dilution of FABs in favour of more progressive initiatives, DANUBE FAB is re-considering its interpretation of the regulation to re-define its overall strategy to meet these new challenges.
What does the future look like for DANUBE FAB?

Veselin Stoyanov: It is difficult to find focus when FAB regulation does not provide any well-defined objectives for what a FAB should achieve. FABs have therefore evolved into wide, all-encompassing initiatives with a lack of direction. Going past the literal text of FAB regulation to appreciate its underlying goal is helping DANUBE FAB to concentrate on quality, not quantity.
For DANUBE FAB, projects which are enabled by geographical proximity is a current focus, acting as the European gateway and expansion of cross border FRA are the most recent examples of this, providing tangible benefits to Airspace Users.
Looking to the future, DANUBE FAB aims to increase the openness and flexibility of the partnership, aware of which initiatives should be pursued together and which should be conducted individually to foster trust between partners and ensure a win/win for both parties. Identifying projects which are new to both ANSPs is far better than attempting to harmonise many deeply ingrained processes within each ANSP which are difficult to untangle.
Partnerships which stand out are those who are bold and create a unique path. With European ATM becoming increasingly competitive, the race is on.

These cookies are necessary for the website to function and cannot be switched off in our systems. They are usually only set in response to actions made by you which amount to a request for services, such as setting your privacy preferences, logging in or filling in forms. You can set your browser to block or alert you about these cookies, but some parts of the site will not then work. These cookies do not store any personally identifiable information.

These cookies enable the website to provide enhanced functionality and personalisation. They may be set by us or by third party providers whose services we have added to our pages. If you do not allow these cookies then some or all of these services may not function properly.

These cookies allow us to count visits and traffic sources so we can measure and improve the performance of our site. They help us to know which pages are the most and least popular and see how visitors move around the site. All information these cookies collect is aggregated and therefore anonymous. If you do not allow these cookies we will not know when you have visited our site, and will not be able to monitor its performance.